As research for an app he is developing, my husband showed me a game he downloaded on the iPad called Dots.  While his interest was purely academic, for me it was like taking a first hit on a crack pipe. The game seems innocent enough, child’s play, really. You connect dots of the same color to get points. The more dots you connect in a row, the more points and audio feedback you get. That’s it. Three hours later, I have the glazed look of a hardcore gambler parked at a slot machine. And, while this is no excuse, I am not the only one: many, many people are addicted to dots.

From pointless to pointillism

Whereas playing endless games of Dots is pointless, some artists use their dot addiction to great effect. Most famously, there was Seurat. He engaged viewers by making them work to see his paintings. Rather than mixing the paint on his palette, he applied tiny dots of pure color next to each other on the canvas, forcing viewers to combine them with their eyes. His overall compositions seem static, simple and serene, while the surface of the paintings scintillate with dancing molecules of color. 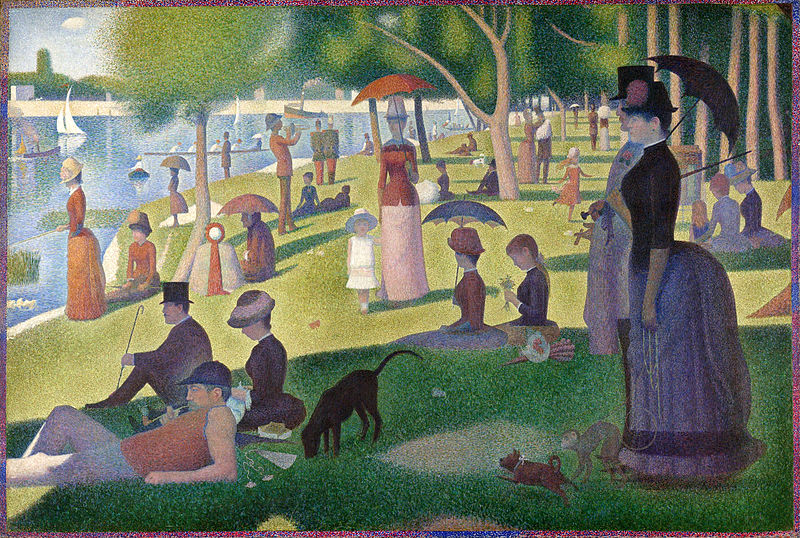 A contemporary master of dot art is Barbara J. Carter. As soon as I saw a print of her Oak Trees Triptych 4, I knew that I had to see it in person. That is the problem (or perhaps the beauty) of her work: photographs just don’t do it justice.  First off, this set of canvases would fill a good-sized living room wall. Millions of large flattened dots are meticulously applied over a red ground to comprise a landscape immediately recognizable to anyone who has traveled through the low rolling hills of California. The colors are maddeningly gorgeous–dominated by oranges reminiscent of the Antelope valley when the California poppies are in bloom and the purples of jacaranda trees in full flower–a combination that works as well in art as in nature (see Orange Crush).

Arguably, Barbara Carter’s abstract paintings are even more spectacular than her landscapes (and translate even less well to digital images). Each of her abstract paintings has at least two layers. The under painting is often liquid and organic in shape overlaid with geometric patterns of perfectly round raised dots. The dots are often subtle gradations of color. These paintings are endlessly fascinating and dazzling to the eye, but at the same time, soothing and serene.  The effect is as mesmerizing as the game of Dots, without the guilt. Barbara has seen viewers touch the dots in her paintings. Who could resist? I confess, they look good enough to eat. 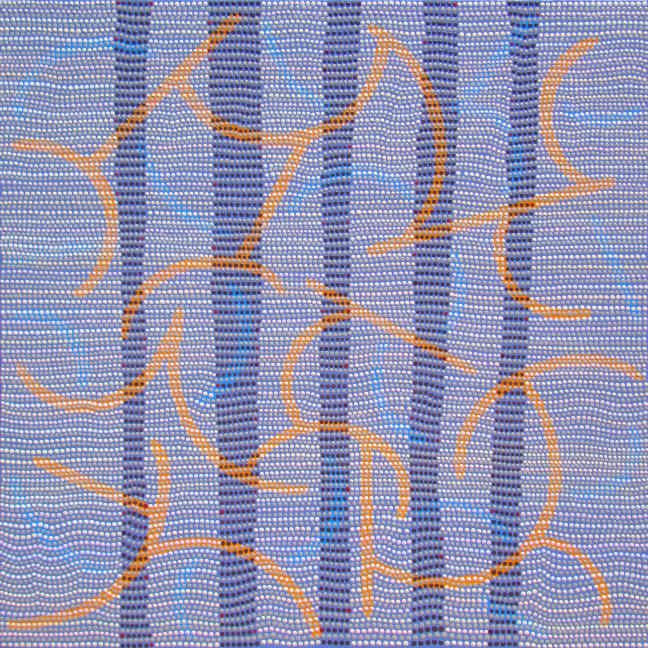 Be sure to check out Barbara Carter’s current work at http://barbaracarter.com/a76/painting.html

Better yet, see her work in person. She shows regularly at the Beverly Hills Art Show and will be at King Mountain’s Art Fair over labor day weekend.