Margaret Atwood and I are not on speaking terms. This is not because we had a falling out, but because she doesn’t know me from a hole in the wall. I read a few of her novels in the past and was delighted when one of the ebooks I put on hold became available for download from the Los Angeles Public Library (god, how I love ya). Without knowing anything about Oryx and Crake, I nearly choked on a GMO corn chip a few pages in when I discovered that the novel is set in a post-apocalyptic world wrought by genetic engineering. And wouldn’t you know, the signature GMO creature is a pigoon…a pig-baboon hybrid hat grows extra livers and other valuable organs for human use. I haven’t finished the book yet, but I have a feeling that it doesn’t turn out well. 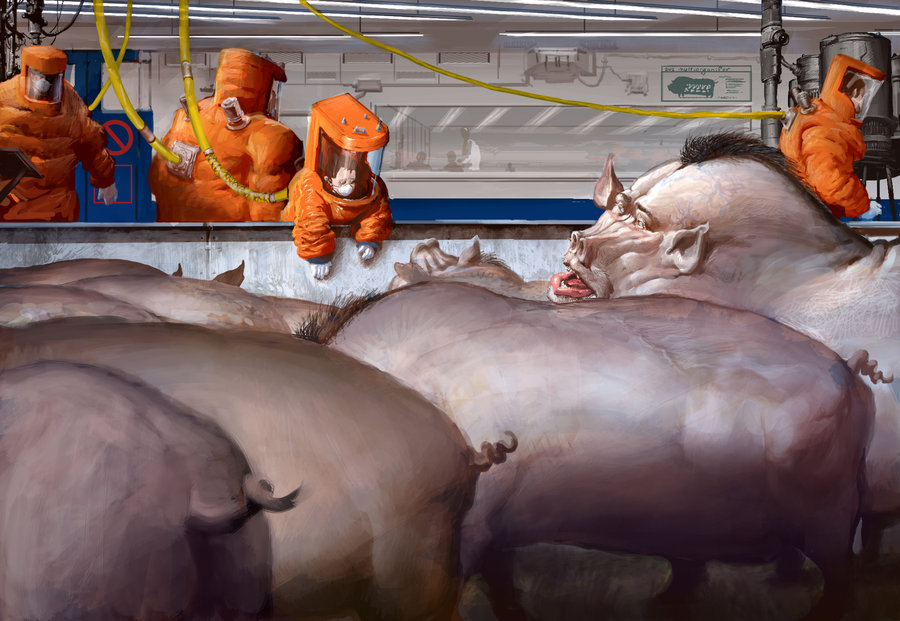 In a split second of overweening pride, I thought perhaps Ms. Atwood had seen one of my pig flowers. This idea turned out to be not only ridiculous, but impossible because the book was published in 2003 and my first generation of pig flowers did not crop up until 2007. Not to mention that pigs figure prominently in such dystopian literary classics as Animal Farm and Lord of the Flies.

Humans seem to have a complicated relationship with pigs. Who can resist Porky, Wilbur, or Babe? Even the Geico pig has his charms, crying wheeeee! all the way home. At the same time, many of us find pigs delicious (mmmm….bacon). Not only do we eat them, we also harvest their body parts: some humans have pig valves in their hearts. One person who came to my Monsanto Gardens exhibit said that he had pig tendons in his arms. Whereas some mystery meats taste like chicken, cannibals report that people taste like pork (hence the term “long pig”).  Perhaps this is at the root of why much of the world’s population eschews all pig products, making them the perfect symbol for GMO products…appealing on the outside, but inside, they just aren’t kosher.