I don’t remember “The Freeway Lady” in her first incarnation because she had disappeared by the time I arrived in LA. All I knew was that the mere mention of her name elicited wistful sighs by those who idled in LA traffic much longer than I have. Nor did I know that the  artist Kent Twitchell painted it along with many other monumental works like the Chamber Orchestra Mural, which I have admired many times from a stopped car.

But when Carol Bishop announced to her painting class at LA Valley College that the Freeway Lady was coming to campus and that LAVC students could work on it with Kent Twitchell in his studio, I jumped at the chance. I had no idea what to expect. Would I have to climb scaffolding and wear a face mask? Would it be gridded out on a building. If we are working in the artist’s studio downtown, how was it going to be transferred to the wall of the student center at LAVC? And, most importantly. What if I smear paint everywhere and wreck it? 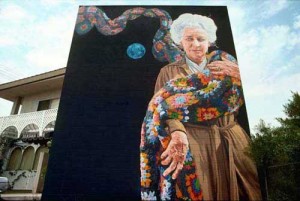 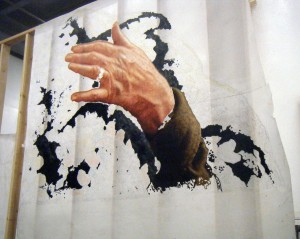 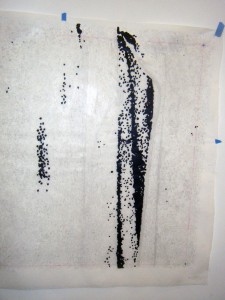 My Contribution (fold in skirt) 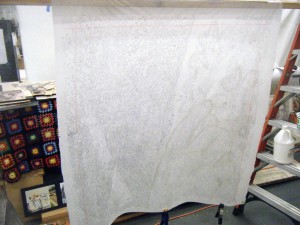 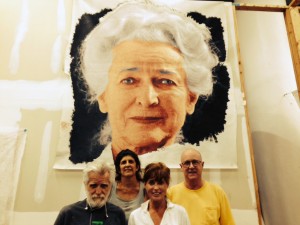 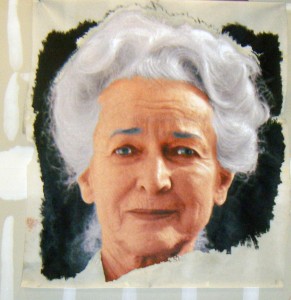 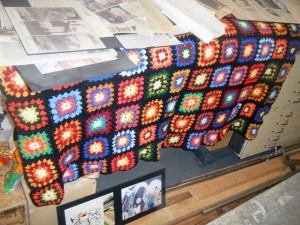 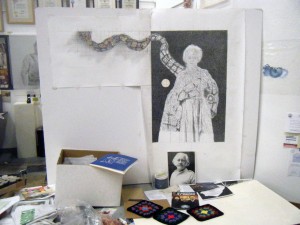 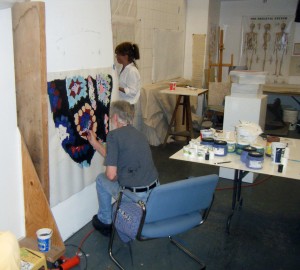 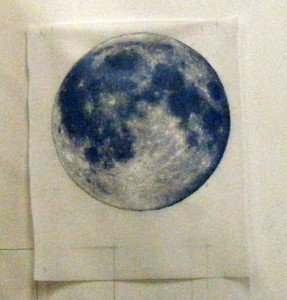 The process turns out to be more magical and mundane than I imagined. Painstaking doesn’t describe it. Attention to detail is a gross understatement. Brilliantly visionary does not capture it.

Much of the magic was done long before we got there. Kent Twitchell had transferred the scale drawing to huge sheets of what looked like tracing paper and taped them to the wall. The sheets are actually a transparent synthetic fabric that the artist treated with layers of clear gesso, matte medium, and gloss medium. Then he pencilled in the drawing on the sheets. The result looks like a typographical map (not a grid). Each dot, area, and organic shape is assigned a number or an X, which corresponds to a color that he mixes and puts into film canisters. The paint is just plain old acrylic paint like we use in class. It is the biggest, most ambitious paint-by-numbers project I have ever seen. The result is astonishing.

We were assigned to paint all the X’s on a sheet (X is black)–everything from dots the size of a pencil eraser to the Great Lakes and the fjords of Norway. After three hours, we could already see the artist’s vision taking shape beneath our brushes.

Kent had done quite a bit of work already on the face, hand, and the moon and was adding color to the afghan while we worked.

How does it get on the wall? Like wallpaper. The fabric bonds with the wall itself for a seamless transfer. I can’t wait to see part of the process.

Thank you Kent Twitchell for agreeing to resurrect your masterpiece after someone foolishly painted over the first one. Thank you LA Valley College for acquiring the mural. Thank you Carol Bishop for letting me help recreate one tiny piece of LA history.